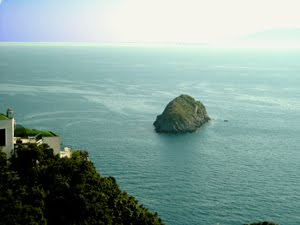 Argentario sea and its beaches! Just beyond Cava del Gesso, the little road is practicable only by foot, and a few hundred meters further on, you will find Cala del Bove. It’s a cliff without beach but the rocks are sanded. It’s a strand made of stones with the view of the Morresca Tower, a paradise for the lovers of the diving, in fact, you will have the opportunity to admire, in the waters, moray eels, octopus, lobsters, sea anemones, red coral, black coral and gorgonians. The name Cala Del Bove comes from “bue marino” which is monk seal (Monachus monachus). The monk seal had chosen right this cove to allocate its colony. The last documentations of the persistent presence of the monk seal in the Argentario stopped to the 50’s. persecutions, obstruction, catches for commercial purposes, are the main factor contributing to extinction of this marine mammal in the Argentario as elsewhere, along the coastline and in Italian isles. Proceeding along Dei Pioneri road, you arrive to the Tower of Cala Piccola, which has a circular shape, it was built on various floors and has a tank for the water collection. Going down along the path you get to Cala Piccola or Cala dei Piatti, it is called in this way because of the discoveries of several relics of ceramics originating from a roman ship that underwent a cloudburst in the sea. The name Cala Piccola is relatively recent and comes from the hotel, that overlooks the beach from a close high ground, and it was built around a Spanish tower in 1600.

From this cove, a few hundred meters to sea, it is possible to see the Scoglio Corallo, the seabed, in fact, are rich of red coral, now it is reduced, because of the uncontrolled plundering who occurred in the 60’s.

Its depths are surely very attractive, among rocks, natural tunnels, and caves that act as refuge for some species of fishes, and even an underground tunnel that went all over it. A shallow, which from a seabed of 45 meters gets to the surface, is one of the best dive spot of the Argentario. Continuing after Cala Piccola, the west coast of the Argentario Cape extends between Punta di Capo D’Uomo south, and Punta Lividonia north, from which the namesake tower stands. Just this Punta is the northernmost point of the whole Cape. The Tower of Capo d’Uomo is a shoreline Tower about 350 mt at the edge of the cliff. There are no historical news, nor precise data about the installation and the evolution of the tower.

The rock wall of Capo d’Uomo is used by freeclimber sometimes.

The tower of Capo D’Uomo is one of the most charming of the Argentario, even if there are only some ruins it has a position on the top of the namesake promontory, that is a real “Eagle core” from which it dominates the Southwest coast of the promontory and moves the look to the isles of the Tuscan archipelago. The promenade is as beautiful as the view. The landscape from the tower is stunning: you can see southwards, the beaches of Capo D’Uomo, L’acqua Appesa, Cala Dell’Olio, Sassi Verdi, Le Cannelle and Il Purgatorio; always southwards on the last “point” there is Punta Ciana with its tower. Down the scenic route of Porto Santo Stefano we meet, passed Capo D’Uomo, the strand of Sassi Verdi e Scorpacciate. The special characteristics of this beach, which is  predominantly rocky, is the presence of green stones. It is surrounded by the beautiful Mediterranean Sea, whose rocky and sandy seabed is rich of every species of marine flora and fauna., it excellent for those who love diving.

From the cliff you can admire the Red Island, framing the Mar Morto.

The beach is free from bathing establishments and has a wild and uncontaminated look.

Go on the SS440 road to reach Porto Santo Stefano, take the scenic route along via  del Canapone, turn on Porto Ercole. Continue on the left side of the road until the indication “Strada dissestata e Strada privata” (rough road and private road). Leave the car in the parking and go towards a brown gate. After 500mt, go down the stairs on the right to get to the beach.