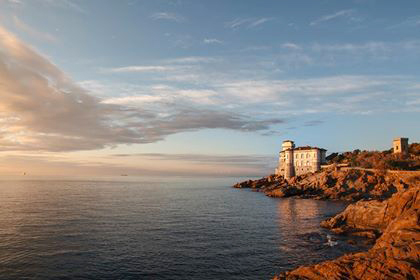 Boccale Castle began as a lookout tower constructed by the Medici family in the sixteenth century and was most probably built on the medieval ruins of another structure built by the Republic of Pisa. Towards the end of the nineteenth century, the villa passed into the ownership of the Marchioness Eleonora Ugolini who transformed it into a neo-medieval style residence with many battlements. The castle then became the property of the Witaker-Ingham family who eliminated the battlements at the start of the last century. The castle was then abandoned for a long time but was recently restored and divided into residential apartments. A small tower used as a store room has been built in the gardens.

Boccale Castle is along the first stretch of rocky coast line near the Romito, not far from Calafuria Tower and Sonnino Castle. The castle itself consists of a rectangular building surrounded by three round towers. The ancient Medici tower faces out to sea. It is thought that the old battlements that were taken down by the Witakers were under the present day eaves.