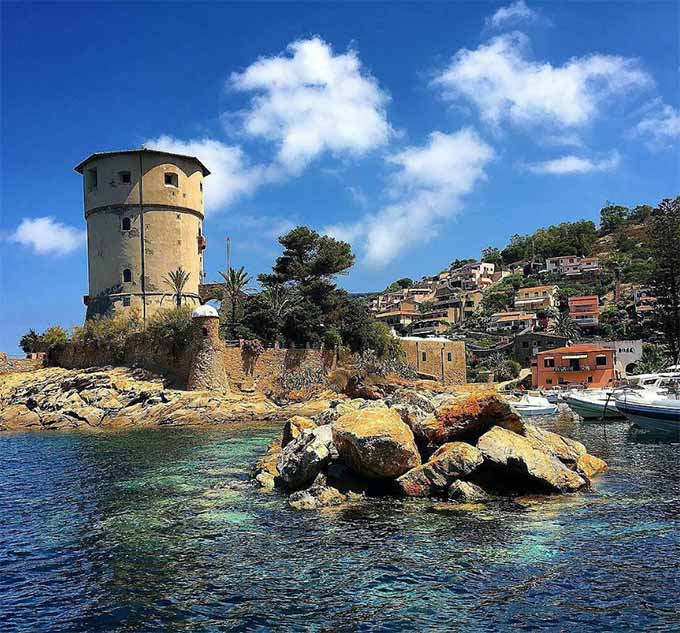 Isola del Giglio is an Italian island and comune situated in the Tyrrhenian Sea, off the coast of Tuscany, and is part of the Province of Grosseto. The island is one of seven that form the Tuscan Archipelago, lying within the Arcipelago Toscano National Park. Like a pearl in an oyster, the small island lies cradled by warm blue seas in the southern corner of the Tuscan Archipelago, 50 km south of Elba and 15 km from the mainland,the promontory of Monte Argentario.
Giglio’s mild climate, unspoilt nature and crystal clear, emerald coloured waters, offer unforgettable holidays all year round. Head for the sandy beaches and beautiful coves if you want to relax, go for the incredibly rich underwater world if you’re into diving, or take one of the numerous hiking paths and explore the uncontaminated countryside of the Isola del Giglio.

Giglio Porto  is settled on the east side of the Island: you’ll arrive there with the ferry from Porto Santo Stefano. Its origins are ancient, since there are traces of the old Roman port. Nowadays, the port of the Giglio Island is a small, coloured village facing the sea, with two lighthouses and the old Saracen tower . It’s the heart of the island, especially during the summer, when all shops, bars and restaurants are open untill night. In Giglio Porto you can find all the main services, such as banks, the post office, the pharmacy, motorcycles/cars/bikes or boat rental and a doctor.

Giglio Castello  is a medieval fascinating village with massive towering city walls upon which it’s possible to walk as the ancient soldiers did.  Get lost through its narrow streets, enter the old churches and watch the view from the scenic overlooks: if you’re lucky, you’ll be able to see the islands of Giannutri, Elba Island and Corsica. Don’t forget to visit the San Pietro Apostolo Church from which you will enjoy an amazing view overlooking Giglio Island.

Giglio Campese is 5 kilometers far from Giglio Castello. The town is settled on the west coast of the island facing the homonym small bay (Golfo di Campese), with its huge sea stack and the Campese Tower. This village isn’t as old as the harbour, but it’s quite new: it’s most ancient building (the sighting tower) dates back to the eighteenth century. In Campese you can find a lot of touristic accommodation, such as a residence, hotels and private houses to rent, moreover there’s an amazing beach with tiny pebbles and a sea that will leave you speechless. The sun sets just in front of Campese’s beach and the sight is amazing!