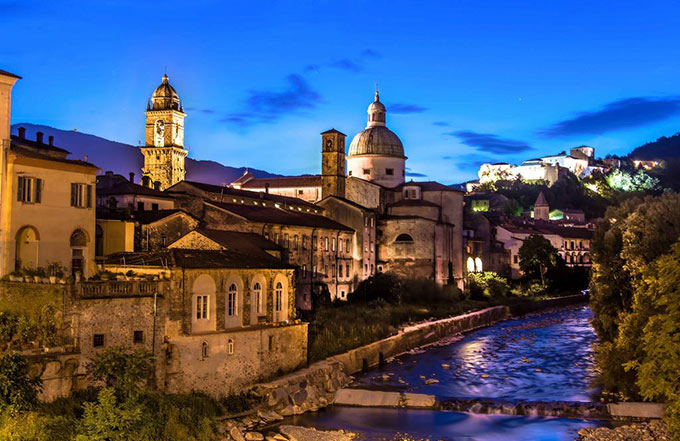 Pontremoli was a “key point and entrance” to the mountain passes that during the Middle Ages allowed the shortest and most convenient road link from Continental to Mediterranean Europe. Traces of Pontremoli and Lunigiana Valley ancient story can be seen in the Piagnaro Castle which houses the Statue Stele Museum with a collection of prehistoric sculptures, carved in sandstone from the third millennium BC, by a population who lived in this area before the Apuan Ligurian people. Pontremoli was a city-state until the beginning of the XIVth century; the old town was defended against enemies by three fortifications: the Piagnaro Castle at the top of the homonym district, the Cacciaguerra Cortina a wall that separated the Guelf from Ghibelline district and the main central tower is still used as a belfry .Pontremoli is a town with many bridges; some of them were made in mediaeval style, for example the two bridges on the Verde, the Cresa bridge upstream and the Casotto bridge or the town’s coat of arms bridge downstream and the old hospital bridge on the Magra river. The medieval churches of St. Peter’s, St. George, St. Nicolò, St Geminiano’s and the Nostra Donna’s church built in the XVIIIth century, are very interesting. The area surrounding Pontremoli can offer tourists picturesque natural resources as the pleasant streams, abounding in fish.

As Pontremoli was built along an important road, hospitality is an important feature for the town. Local cuisine is particularly appreciated; its origin comes from the blending of genuine ingredients typical of the people who lived in Liguria and in Emilia with a “pinch” of Tuscan flavour.

Anghiari , one of the most beautiful towns in Italy , a small town in…

Torre del Lago, a part of the municipality of Viareggio, famous worldwide for its unique…