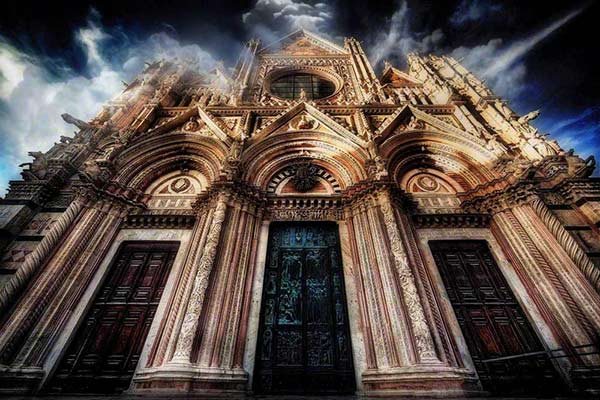 Siena Cathedral (Italian: Duomo di Siena) is a medieval church in Siena, Italy, dedicated from its earliest days as a Roman Catholic Marian church, and now dedicated to theAssumption of Mary.

The cathedral itself was originally designed and completed between 1215 and 1263 on the site of an earlier structure. It has the form of a Latin cross with a slightly projecting transept, a dome and a bell tower. The dome rises from a hexagonal base with supporting columns. The lantern atop the dome was added by Gian Lorenzo Bernini. The nave is separated from the two aisles by semicircular arches. The exterior and interior are constructed of white and greenish-black marble in alternating stripes, with addition of red marble on the façade. Black and white are the symbolic colors of Siena, etiologically linked to black and white horses of the legendary city’s founders, Senius and Aschius.

best places to visit in tuscanypictures of italysiena
Related Posts

The Church of Santa Maria dei Servi is a Romanesque style, Roman Catholic church in…

Castiglione della Pescaia, regionally simply abbreviated as Castiglione, is an ancient seaside town in the…