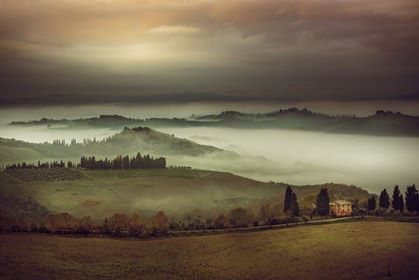 Asciano is a small Tuscan town about 25 kilometres to the south-east of Siena and in the Ombrone River valley. You are likely to come across the town as you explore the Crete Senesi region of southern Tuscany.

Although Asciano is only a small town it is worth stopping for a look to see the medieval centre as you explore the unusual landscapes of the Crete Senesi region.

The principal attraction is the collegial church of Saint Agatha. This church dates in part from the 12th century and is in the roman style of architecture. Although some parts have been modified since you can still clearly see much of the original church. The facade is very simple with a row of blind arches and the bell-tower, added in the 13th century, is typical of those in the region. Inside the church you can see the inside of the large octagonal dome and also two lovely frescoes.

Next to the church in the oratory there is a small “Museum of Sacred Art (Museum Cassioli)” containing a small collection of paintings by local Sienese artists, while more notable nearby is the small “Archaeology Museum (Corboli Museum)” with several artefacts found in local Etruscan tombs and interesting art works.

After exploring this history take the time to stroll around the streets of the old town in Asciano, with a mix of houses – some built in the small bricks of the region, others in stone. It is very much a traditional town – pleasant to explore if unexciting, not very frequented by tourists, and a bit ‘rough round the edges’ in places…

You will also see parts of its original medieval defensive walls as built in the 14th century and the 13th century Church of Saint Augustine, with a brick facade and some medieval artworks inside.

Piombino is located in the final stretch of the Etruscan Coast, which ideally begins at…

Castiglione della Pescaia, regionally simply abbreviated as Castiglione, is an ancient seaside town in the…

Collodi, a wonderful small town not far from Pistoia, where you can visit the original…