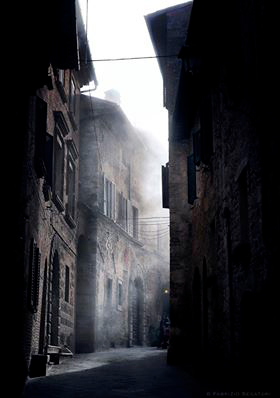 Passing under the imposing gate of Porta al Prato, you soon enter the Corso, full of all kinds of shops and fashionable stores. At the first square you reach, admire the Colonna del Marzocco, a marble column with the heraldic lion of Florence which also decorates many other palaces such as the Palazzo Avignonesi. A series of sumptuous and elegant palaces succeed one after the other, until you come in front of the Church of Sant’Agostino, designed by Michelozzo, an important artist working for the powerful Medici family. The church displays a Crucifix attributed to Donatello. Moving on, just across the street, your attention will be captured by a tower house, adorned with the curious figure of Pulcinella, striking the hours on the big clock.  Continuing on the Corso, passing further Renaissance buildings, you meet the elegant Palazzo Cervini, and nearby shortly before the road turns, you arrive at the home of Poliziano, a great humanist and poet under the patronage of the famous Lorenzo di Medici. Poliziano was also teacher to the Medici children.

The medieval cathedral of Pisa , That is the Cathedral of Santa Maria Assunta ,…

The Ponte Vecchio is a Medieval stone closed-spandrel segmental arch bridge over the Arno River, in Florence,…