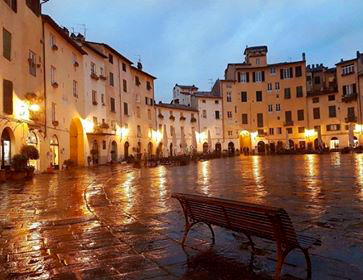 Piazza dell’Anfiteatro is a public square in the northeast quadrant of walled center of Lucca, region of Tuscany, Italy. The ring of buildings surrounding the square, follows the elliptical shape of the former second century Roman Amphitheater of Lucca. The square can be reached through four gateways located at the four vertices of the ellipse. A cross is carved into the central tile of the square with the arms pointing to the four gateways of the square.

The base of the former amphitheater (dating back to the I or II century b.C.) is now some 3 meters below the center. At its peak about 18 rows of amphitheater seats held some 10,000 spectators. Now an urban square, surrounded by private residences, and occupied by several outdoor cafes, created in 1830 by the architect Lorenzo Nottolini who razed some of the buildings inside the oval. It was originally refurbished to be a marketplace.

Florence, the spectacular capital of the region of Tuscany, is located on Italy's northwest coast.…

Charming part of the country Val d' Orcia, located in Tuscany, in the province of…

Anghiari in province of Arezzo

Anghiari is a town and comune in the Province of Arezzo (Tuscany, Italy). Bordering communes…