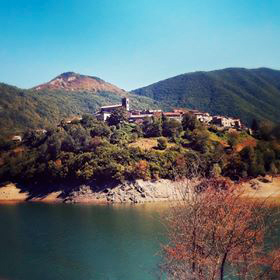 This isn’t something out of a science fiction novel: it’s a real place. It’s Fabbriche di Careggine, a Garfagnana town that was filled with water in 1946 to build Lake Vagli, an artificial basin owned by Enel and forming part of a dam, used for hydroelectric purposes and as a water reserve for the entire area in case of fire. Fabbriche di Careggine’s residents had to move to a new town, Vagli di Sotto, on the promontory of the lake, and the twelfth century town vanished forever. Today the ghost town emerges from underwater only when the dam is drained for maintenance work. So far, this has only happened four times: in 1958, 1974, 1983 and 1994. There have just been these four occasions to see Fabbriche di Carreggine emerge, with its stone houses still standing, along with its cemetery, bridge, and the Church of San Teodoro, whose belltower is now in ruins. Since 1994 Enel hasn’t emptied the dam: the next chance to see the town will likely be in summer 2016, but this hasn’t yet been officially confirmed.

Anghiari , one of the most beautiful towns in Italy , a small town in…

Piazza della Signoria is an L-shaped square in front of the Palazzo Vecchio inFlorence, Italy.…