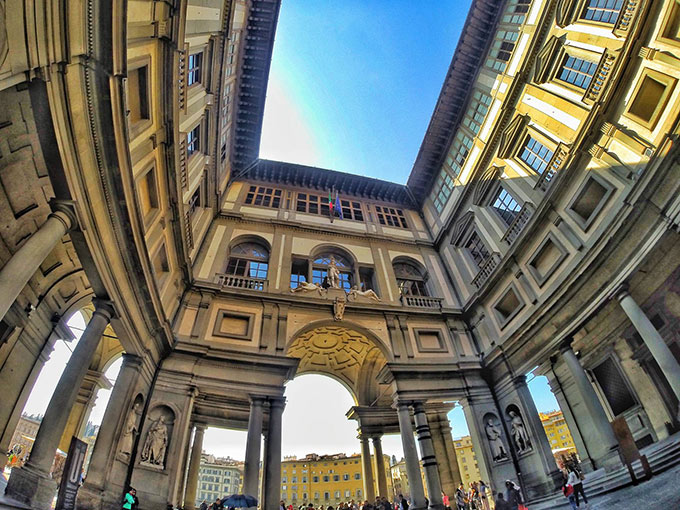 The Uffizi Gallery is a prominent art museum located adjacent to the Piazza della Signoria in central Florence, region of Tuscany, Italy.

The building of Uffizi complex was begun by Giorgio Vasari in 1560 for Cosimo I de’ Medici so as to accommodate the offices of the Florentine magistrates, hence the name uffizi, “offices”. The construction was later continued by Alfonso Parigi and Bernardo Buontalenti and completed in 1581. The cortile (internal courtyard) is so long and narrow, and open to the Arno at its far end through a Doric screen that articulates the space without blocking it, that architectural historians[2] treat it as the first regularized streetscape of Europe. Vasari, a painter and architect as well, emphasised its perspective length by the matching facades’ continuous roof cornices, and unbroken cornices between storeys and the three continuous steps on which the palace-fronts stand. The niches in the piers that alternate with columns filled with sculptures of famous artists in the XIX century.

The Uffizi brought together under one roof the administrative offices, the Tribunal and the Archivio di Stato, the state archive. The project commissioned by Cosimo I de’ Medici, Grand Duke of Tuscany planned to display prime art works of the Medici collections on the piano nobile; the plan was carried out by his son, Grand Duke Francesco I. He commissioned from the architect Buontalenti the design of the Tribuna degli Uffizi that collected a series of masterpieces in one room, and was a highly influential attraction of a Grand Tour.

Over the years, more sections of the palace were recruited to exhibit paintings and sculpture collected or commissioned by the Medici. According to Vasari, who was not only the architect of the Uffizi but also the author of Lives of the Artists, published in 1550 and 1568, artists such as Leonardo da Vinci and Michelangelo gathered at the Uffizi “for beauty, for work and for recreation.”

The Vasari Corridor  is an elevated enclosed passageway in Florence, central Italy, which connects the Palazzo Vecchio with the Palazzo Pitti. Beginning on the south side of the Palazzo Vecchio, it then joins the Uffizi Gallery and leaves on its south side, crossing the Lungarno dei Archibusieri and then following the north bank of the River Arnountil it crosses the Ponte Vecchio. At the time of construction the Torre dei Mannelli had to be built around using brackets because the owners of the tower refused to alter it. The corridor covers up part of the façade of the chiesa di Santa Felicita. The corridor then snakes its way over rows of houses in the Oltrarno district, becoming narrower, to finally join the Palazzo Pitti. Most of it is closed to visitors.

The grape harvest is always a delicate and exciting time for cultivating the screws: every…